skip to main | skip to sidebar

Psychology is facing an increase of his members. There are several universities that give psychology and in a future that will be a problem. It´s true that with more people are more crazy and I don´t think the population in Chile shows signs of decreasing. But there will be so many psychologies that this carrier would be stop for a few years.
Another problem that I think is the poor communication we have with another universities in this field. I listening some comments like:” in this is university we impart a humanist psychology”, fortunately, Universidad de Chile show us many views, since psychoanalysis to conductism and let us decide on which area we want to study and isn´t impose for the general idea of the university.
Because psychology is a science, I don´t ear about studies or theories from chilean psychologist. We need to improve as a psychologist in general, and for that we need to make as much as possible. I´m glad that many or all of my teachers are making studies and working in other aspects of psychology and not only as teachers.

About social problems, Psychology is called to respond to this time and work to improve the level of life that chileans are experimented. I hope not sell me and work, as I said in other posts in public areas and also as a private psychologist. There are some people who don´t know the ugly face of Santiago. In this area there are people who have problems that need some help.

The education topic is the most important I think, I don´t know if I´m, going to be just a psychology, but what I´ve learn can help me to face the problems that would appear in the future. If I have some of the tools that psychology can give, many of school problems doesn´t need to be so much difficult. I think psychology improve you as a person and the kind of knowing that teach you can let you see clear and resolve some problems. In the school many kids doesn´t have that knowledge because they don´t have the support of parents or friends. They have lonely lives and psychology definitely would help them. We need to create a best world for us now and latter. Improving as much as possible and teaching to our kids, leanings that psychology can give.

Greetings.
Posted by Paulo at 1:17 PM No comments:

I think I´m bad with money because once I have it, I can´t organize myself to distribute it as well as possible.
Also, I usually spent it once I have it in my pocket. That´s because I don´t have it frequently.
Because I don´t have it, I can´t lend it, but if you have a lucky day, probably I will borrow you the few coins that I carry on.
I frequently borrow from other people and I don´t pay back quickly. But I try to do it.
I don´t care manage money because is not important for me. I think if you have money, save it or spend it in something you really need it or want it. For example, If I want to read a book, I try to find it on the internet, even if I don`t like read form the pc. So, I need to buy it, and unfortunately, culture is expensive.
I have two types of bills, the one that I have with the university and the others that I have with people. I pay my university bills with checks at the Sencillito service. But, with people I carry the exactly amount that I have to pay.
I think it´s a great idea that schools teach children how to use money because: 1) if they know the meaning of money, they will know the possibilities and how hard is to have it, 2) if you start to save in early levels, you could have a great party at the end of school. Travel to other countries, for example and 3) the most important thing, money is nothing if the person who have it doesn´t know how to use it, is not the money what define a persons. This is important because people doesn`t have the same amount of money, but that doesn´t mean that some people are better than other.
One way to pay for a job is depositing the amount of the job in a bank, and that´s the reason why I have my count.
The only problem is when you have to make a deposit or something else in the bank and is full of people. Usually one hour only for a deposit.
As I said, money doesn´t make people, is the people who gives the meaning of money. For my goodness I have to know how to save and organized it by a better way.
Posted by Paulo at 9:22 AM No comments:

My first option was study in Spain, that´s because I want to go to Europe and what better place that one who speak in spanish.
But, when I talk to muy cousin she recomended learn as much as I can in difficult situation, like urgency.
So, I started to think about it.
By the way, I don´t have an specific position of what I should study in psycology, but what I want to do is help people. First, those persons who can´t help themselfs, cases like suicide or poor emotional situation, like living in a difficult enviroment. I think problems are problems, it doesn´t matter if you have or not money, what is matter if the help, so I wanna learn as much as in difficult situation, like the work I could do in a hospital and then make togheter teraphy in a hospital and also in a clinic, like a particular.
The other aspect that I wanna help is the environment of people. Probably for the influence of my teacher of basic process.
So, in a few words. My vision is learn as much as I can in difficult situations, puting me in cases that people doesn´t have the tools to have a nice live and try to help them, that can give me the perspective of what difficult could be the life. I think is important to have the vision, because how I could talk to someone who is depress if I only read about it, I need that experience and is not in a fancy room. But like I said before, problems are problems, so I want to do my professon, in a hospital with people who need help and also in a clinic, for those who can pay for it. Both, with or without the money need help.
And about the environment, it is extremly important; if you have a lovely one, the way you see life is very oposite to people who doesn´t have it. A nice environmente can help you to heal.
Europe can wait, right now I need the experience that my own country can give me.
Posted by Paulo at 10:52 AM No comments:

Were should I go in Santiago?

If you came to Santiago, there are a few places that you really should know, like:

Fantasilandia: This is an incredible enterteinment park. Boomerang is an incredible roller coaster, with a few loops and great speed, also there is Kamikaze, it´s like pirate ship but with the full loop.
Julio Martínez Stadium, know as National Stadium: If you wanna vibrate and know the meaning of “hinchada” you must watch a match of national selection, know as “La Roja”. Also, there are some classic matches like Colo-Colo v/s Universidad de Chile, you can´t miss it.
La Moneda: it´s the president office. Next year will be the birthday of Chile and there´s gonna be a great party in there, near is Entel tower, on new years, there are fireworks fired from the tower.
San Cristobóbal hill: This is a quite place. Here is Santiago Metropolitan zoo. There are some zebras and giraffes. An another atraction in San Critóbal hill is the funicular and teleférico. There are an amazing view from this atractions, and you can watch the entire city.
Bellavista nighbour: This is an amazing place to drink some beers and have some fun. There are discos and pubs. This is a cool place. Full of energy and life. But you must be warning, the thiefs and drunks are everywere.
Posted by Paulo at 11:31 AM No comments: 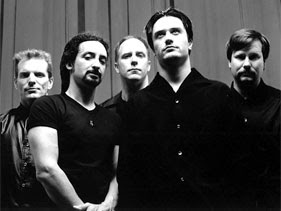 Faith No More is my favourite music group.
Despite the fact that I enjoy many other kind of music, like reggae (Bob Marley), grunge (Nirvana, Peral Jam), punk (The Clash, The Sex Pistols) or some pop groups like INXS. I really enjoy listening Faith No More.
I started this summer to listening them. Suddently I recognize that I have to know more music that I knew already, so I satrted to download from the internet his albums.
They aren´t a particular kind of music, they have many influences, specially from rock.
I like it for many reasons but most important for his position about the music they make. They said "Right now, people wan to clasified you, they wanna put a marck on our music. We just make music, and we don´t care if they are agree with that"
Also, they have many grat songs and albums, I really recommen King For A Day. It´s essencially what they are.
My favourite songs are: 1) King for a Day, fool for lifetime, 2) Just a man, 3) Ashes To Ashes, 4) Midlife Crisis, 5) Evidence,... and if you want to 6) Easy and 7) Epic. They most popular songs.
I wan to listen them live, on October 30th will be his concert in stadium La Florida, here in Chile, and obviously I have my ticket.
They have many energy on stage and I´m just waitting for the date.
Posted by Paulo at 10:47 AM 1 comment:

I would like to go to Spain.
The best reason I have to go to Spain that´s I knew two amazing people in the north of Chile, a few years ago.
Both are Spanish. The first one, Abel, was a crazy dental technician who was travelling around South America. The other one was Patricia, she studies laws and she also was travelling around South America. We started a great friendship and we according that the next time we see it will be in Spain.
Also, Spain is the first stop crossing the Atlantic Ocean.
Later than traveling 14 hours in a plane, it´s important arrive in a place that you could understand the language for practical reasons. At lease you know English. That helps you to communicate with other people.
About Spain I know that Salvador Dalí born in Cataluña, a province of Spain.
I really wan to see his paintings. I was one of the most important and amazing painters of the movement called surrealism.
Also I want to go to the Camp Now stadium, it´s the stadium of one of the most popular soccer team of the world, F.C. Barcelona.
I want to study in there, probably a P.H.D. in psychoanalysis. And according of the situation, live a few time in there.
Posted by Paulo at 11:32 AM No comments:

Greetings:
In the first semester we have six signatures, which was anthropology, psychology, philosophy, methodology of social investigation, history and psychobiology.
I think are two kind of relevant things, the one about the signatures and the relevant about the discussion of the signatures with partners.

About the first one:
anthropology: the person is constantly interacting with his media and that interaction affect both.
psychology:
Posted by Paulo at 11:35 AM No comments: